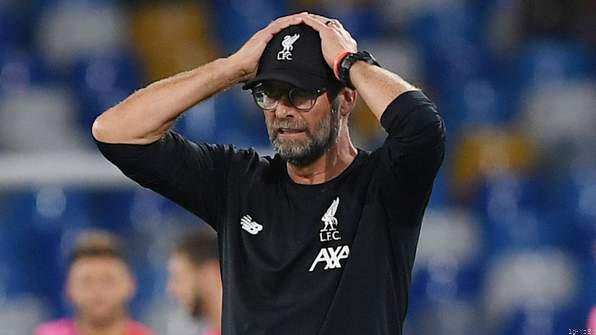 Liverpool manager Jurgen Klopp was left frustrated by what he saw as a “clear and obvious” mistake on a penalty call against the Reds, although the German coach also admitted his side was not at the level needed to win against Napoli.

The Reds fell to a 2-0 defeat in Naples as they failed to take revenge for the defeat they sufffered in Italy the same side last season on their way to their Champions League triumph.

On Tuesday, the defining moment came from the spot as Andrew Robertson was penalised for a foul in the box on Jose Callejon in the game’s waning moments.

Dries Mertens buried the ensuing spot-kick, although may viewed the penalty call as soft.

After the loss, Klopp was upset with the referee’s decision, although he also expected more from his players on the day.

“What can I say? For me, it’s clear and obvious not a penalty because Callejon jumps before there’s any contact. But we can’t change that. We have to be critical with ourselves. We could have done better,” Klopp told BT Sport.

“They did well in a lot of moments, we played a lot of good football that we didn’t finish off. We had our chances. There were moments when we wanted a free-kick. I don’t understand why there was no free-kick when Sadio [Mane] goes down up and down, up and down. You think ‘what’s happening here?'”